Tom Brendt with a report on his event in Morocco this year: „The pretty critical political situation in some northern African countries and the fact that our Wave Specials in 2009 and 2010 both have been windy and wavy and a big success, made me wonder if our first Wave Special in 2011 in Moulay / Essaouira could be as succesful especially when i saw the wind and wave forecasts in the weeks before our camp.

What can I say, it has been even better than our previous events. Again some very nice clients found their way from Germany, Switzerland, Holland and France down south to join our clinic. Six days at the Magic Fun Center Moulay, a Fanatic „The Boarderscenter“ with the IBIS Hotel Essaouira as our home and base for nightlife action.

After the last check of the forecast there was no doubt that, if the forecast was telling the truth, we might have ideal Moulay conditions for the whole week. Indeed, after some spot, wave and safety explanations the group could head out straight away into 2 meter high waves, powered up with 5,0 and 5,3 sails, just perfect for the first steps in wavesailing or just to play a little on the waves and learn the easiest ways to cross the waves. Knowledge which should be important for the following days. With each day the waves were growing and the conditions became more and more challenging, but since it has all been filmed we could just watch and learn during the video sessions at the chilly Cafe Resto, right on top of the Magic Fun Center and with a great view right onto the Spot, and quickly all participants looked much more confidant in and on the waves, even if some knees started shaking when the next windsurf session came closer.

Something i got asked between all our sessions was what all that SUP is about ? Well on day four of the Clinic the wind took a little break and we all got the chance to take out the Fanatic SUP Fly and Surfboards and try out Stand Up Paddling and Surf. Not the easiest task with still 2- 3 meter high sets rolling over the massive reef, even more impressive that almost all of my clients managed to carve some turns into a couple of waves. That had to be celebrated with a nice couscous night in Essaouira, which should also charge the batteries for the next day, where already at our arrival the wind was blowing for the 4,2 sails with again logo high waves. Time to not only work on the waveriding skills but also on jump techniques. During the day the waves kept on growing and the wind decided to blow a bit harder, too. After a long long day on the water in close to perfect conditions, we had to skip our night program as already at late afternoon and our transfer back to Essaouira most of the group weren´t even able to speak and just needed their bed. One more day to go, and it was the biggest day I´ve ever witnessed in Moulay, well over masthigh waves were rolling in, massive walls of whitewater. Unluckily the wind direction, which had slightly shifted, forced anybody to stay on the inside as crossing those beasts was just not possible even for the top local guys. We used the time for some last theory and excercises at the beach, so that no question was left unanswered and just anybody of that group came to the conlusion that it just couldn´t have been any better. Well, i would say they were right. One week with very nice people, perfect wave conditions, great windsurf gear, a very nice and charming windsurf center plus a bunch of new real wavesailors and those who are on the way to get one.!

This time we won´t wait another year to go back to this magic spot, we have our next Wave Special Moulay scheduled for 21st – 26th of September 2011

You can get all Informations at: 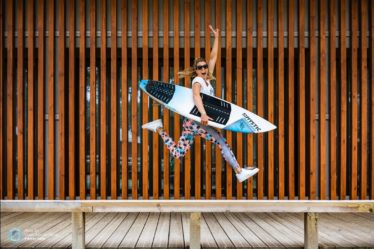