Ethan (13) was able to obtain a wild card and make his debut for the PWA freestyle, and after some testing also was able to join the PWA slalom as the youngest competitor, which was held in Aruba.

Ethan ARU-4: „In as few words as possible: it was the best experience ever!  I learned so much in that one week, where it would normally take half a year to have the same growth.“

His overall standings were slalom 45, and freestyle 33, simply because the other guys are much stronger and go much faster.

Following the PWA event the regular Hi Winds competition for amateurs, young and old is held. This event was blessed with a lot of wind and all the competitors were satisfied and tired at the end of each day.

Ethan(13) decided to join the older guys instead of joining the under 15 year olds and went with the under 18 years olds. This gave him more competition and makes him push himself harder.

After 3 days of racing Ethan was in 1st place.

On Sunday the long distance race was held and was similar to 3 slalom races, making this race really tough. The results were very close with 50 yards between 1st and 2nd place. During the first race Ethan took 2nd place and then in the second race took 1st.

Despite the wind dropping the freestyle event was still held that afternoon with competitors rigging up their bigger sails. Ethan took 3rd place in the under 15’s.

Overall this was a very successful event.

Ethan ARU-4: „Many thanks to my sponsors for helping me with my Windsurfing career! Without you this would be impossible“. 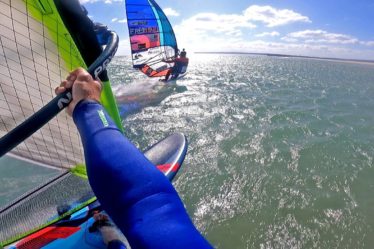