The first day of the Kite Masters in Tenerife started late as the wind took some time to pick up. Extreme Elements used this relaxed morning to shoot some lifestyle shots up on the highest mountain in Spain, El Teide (3718m). They managed to take some beautiful shots of the north side of the island by paragliding back down from the peak. The wind finally increased to a steady 15 knots allowing the organizers to start the racing part of the Spanish Championships. A fleet of riders went out in the ocean to battle it out on a four buoy rectangular course. Richy Rodriguez took the lead over Borja Jochen after three disputed races today.

Meanwhile the PKRA riders went out for a training session and the Media had the chance to shoot photo sequences and slow motion tricks in the water. Alberto Rondina (ITA, Cabrinha) rode for a few hours and was happy to be on a 13 meters kite instead of the 6 meters he and his fellow competitors were riding all of last week in Fuerteventura. This allowed him to try some flat 3’s and 5’s off the little kickers, which built up in the afternoon.

As riders were training, a few tricks discussions started on the beach today. Alexander Lewis Hughes (PKRA judge) suggested a new move known as “the G-spot”… a rather confusing name for most of the riders, but it turned out to be a “toe side front flip to blind”. The riders had a hard time figuring it out but gave it a good go for the local Spanish TV crew who came later during the day to film a short report. Youri Zoon (NED, Slingshot) landed a perfect flat 7 right in front of official PKRA photographer Toby Bromwich, who happily caught the sequence for the magazines. Youri had an interesting lunch today as he met with the commentator of the event who is also a magician; he performed a few tricks for Youri and left him baffled by the magic.

Alvaro Onieva (ESP, Slingshot) who is here to partake in both the Kite Masters and the Spanish championship was happy to train on a bigger kite but says he is looking forward to stronger winds so that he can show more power tricks to the public. He also added that “some very big names are here, especially the Dutchies [(Langeree (Naish), Zoon (Slingshot)], so it should be an interesting competition. Also I landed a flat 7 too but nobody saw it…”

The girls came down to the beach this afternoon but didn’t go on the water. Angela Peral (ESP, North) was happy to see everyone out there and chill a bit as she’s here to have fun. She says she will go training in the nice waves of El Cabezo when the conditions are right. The same goes for Kari Schibevaag (NOR, Ozone), who has suffered from a terrible infection in her leg after a journey to Morocco. The infection spread very quickly but luckily the doctor successfully managed to control it and she is now ready to ride again.

The weather forecast seems to indicate stronger winds for tomorrow, which will increase even more toward the end of the week. We’re expecting good conditions for a nice Freestyle competition and a few more races in the Spanish championship.

Watch the photos of this day 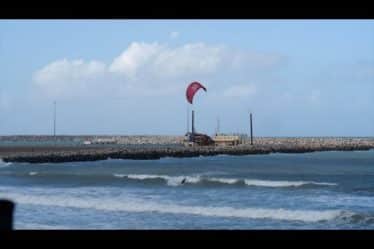