Day one: Forty knots of wind and pumping swell provide the PWA’s elite with a wild welcome for the opening day of competition in Pozo.

The first day on the men and women’s wave tour kicked off to a flying start as Pozo Izquierdo lived up to its reputation providing steep waves and ballistic winds for the world’s most extreme sailors to work with.

The exceptional conditions ensured the sailors were eager to hurry though the formalities of registration, rig their gear, and hit the water. Head judge Duncan Coombs announced that competition would commence at 1:30pm sharp, and the heats would be twelve minutes long with the best three jumps counting along with the best two wave rides.

Round one of the single elimination sprang into action, seeing an exhilarating array of radical maneuvers and many of the big names unleashed their biggest jumps to fight through to the last thirty-two. Kai Lenny (Naish / Naish) defeated Martin Antoine (JP / NeilPryde) with a record five turns on one wave along with a perfect backloop and tweaked out table push loop. Phil Horrocks (JP / Gaastra) played his consistent card to defeat Jose Romero (JP / NeilPryde), and Germany’s Florian Jung (RRD / Gun / Dakine) took down Alessio Stillrich (Fanatic / North / AL360) with a clean pushloop and his vertical frontside riding.

Heat 6 saw a particularly close dual between Ireland’s Mikey Clancy (Starboard / Severne / MFC) and his Severne team mate, wild Moroccan Boujmaa Guilloul (Starboard / Severne / Mystic). Guilloul lined up three enormous jumps to open the heat, whilst Clancy chose to secure his wave rides. Clancy then upped the game and landed the first double forward loop of the competition. Guilloul fought back with solid wave and a clean backloop securing his pass into the next round.

Having missed the opening four minutes of his heat, Peter Volwater (Fanatic / MauiSails) managed to secure the win by landing all his moves with polished perfection to ensure the slip up wouldn’t restrict his advances in the single elimination.

Round two brought with it more unbelievable action as the sailors were forced to raise their game with the arrival of the top sixteen seeds on the Pozo battleground.

Dario Ojeda (Simmer / MFC) earned himself the highest scoring wave of the day with a perfect wave 360 and a number of slick turn’s allowing his entry into the third round, passed young Australian wave specialist Jaeger Stone (Starboard / Severne).

Gran Canarias’s wave wizard Philip Koster (Starboard / NeilPryde) was next up and stole the show, reaching astronomical heights with his stalled forwards and one footed backloops. He caught both the crowd and the judge’s attention with his incredible moves, confirming that he is one to watch out for on the 2011 world tour.

The most invigorating heat of the day came between Brazil’s Marcilio Browne (Fanatic / North / MFC) and the young Catalonian Aleix Sanllehy. Sanllehy performed an outstanding show on the world’s toughest stage and made the most of the dropping conditions with his technical wave riding and astonishing jumping. Browne returned the challenge with his powerful wave riding and perfect double forward loops. Both the sailors were awarded with particularly high scores however Browne narrowly stole the win.

Jose Estredo (Fanatic / North) was unable to sail in his heat due to a shoulder injury, allowing Kenneth Danielsen (F2 / Simmer) an easy ride into the third round.

The retreating conditions caused a half an hour break before the elimination could continue into the third round, providing the sailors enough time to select the correct weapon, to see them through the heats with the smaller waves.

Ojeda continued his path of destruction defeating Eleazar Alonso (Naish / Naish) with his huge pushloops and backside 360’s. Campello overpowered Ben Proffitt (Simmer) with his super-fast double loops off tiny chop and Koster sealed the deal with an ankle dry colossal pushloop forward. Heat 19, the final heat of the day was cancelled due to the deteriorating conditions and the sailors were released at 7pm after an epic day of competition.

Tune in tomorrow for more unbelievable action from the PWA’s elite wave sailors. The skipper’s meeting is planned for 11:30am with a first possible start at 12. 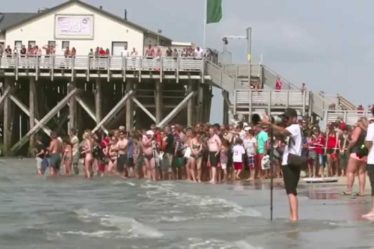