Today another 16 heats of the Tenerife Kite Masters 2011 were disputed here in El Medano. According to Race Director Olaf Van Tol the riders are now getting used to the conditions, “This afternoon we began to see some higher board offs as the riders used the nice kickers which line the spot.” For the first time in the competition a full 10 point score was awarded by the judges. First for Tom Hebert (FRA, North); he landed a “king dead man” after a gust took him by surprise during the middle of his trick. He was lifted up further in the air for a few more seconds than expected, but managed to hold the board off with his body upside down.

The second ten points were given to Youri Zoon (NED, Slingshot) for performing a perfect flat 9 once again, but this time during his heat against Hamaini (MOR, North).The clip of the 900 :

Today saw the first of the girl’s heats, the two wave-riders Kari Schibevaag (NOR, Ozone) and Angela Peral (ESP, North) went back to their roots to perform a few freestyle tricks for the public. Kari is the current leader of the 2011 Wave championship and came here to Tenerife to train in the waves of El Cabezo which is on the other side of the bay. Today she managed to land a railey to blind as well as a couple of impressive high jumps. Meanwhile Angela Peral had fun competing against her friend Cristina Resinas, both girls came from Tarifa to enjoy the waves of Tenerife. This was Cristina’s first time on the PKRA and she is loving the atmosphere of this event, she remarks that she never imagined it would be such an entertaining experience. Angela and Kari seem to be the two best girls so far and will most likely be meeting in the finals. Ariel Corniel (DOM, Ozone) went for some high handle passes and managed to beat Alvaro Onieva (ESP, Slingshot) in his heat. Alvaro explains the reasons for his loss very simply, “the gusts just didn’t blow in my favor and therefore I couldn’t perform the high jumps I was expecting to pull off.”

A couple of newcomers came to this event; the two Venezuelan riders Oscar Hurtado (VEN, Slingshot) and Sergio Coello (VEN, Liquid Force) were boasting some very powerful maneuvers. Oscar rode very well in Fuerteventura last week and proved to be a serious contender for the next few events. His style is very radical; he lands perfect front blind mobes and low mobes which are reminiscent of the old riders of the tour. We are looking forward to seeing these moves at future events and will be keeping a keen eye on their progression.

After 3 days of competition Hebert (FRA, North) remains the only undefeated rider so far, he even succeeded against Alberto Rondina (ITA, Cabrinha), who is ranked 3rd on the PKRA and who was a serious contender for first place in this group . Tom is now almost secured a place in the finals whilst Zoon, Onieva and Corniel seem to be the best contenders from the other group. We met with Alberto Rondina (ITA, Cabrinha) after the last heat of the day, he’s enjoying this competition as the spot is perfect to get some speed between the waves which allows you to go big and get some serious height. He reckons that the “Frenchies” are doing very well, and lost his heat today due to some nice board offs shown by French competitor Hebert.

Tomorrow will be the end of the competition and things begin to get a lot more serious for everyone. The riders are beginning to count up their points in order to gain a precious place in the finals. The wind conditions will remain the same so we’re expecting another perfect day of action. 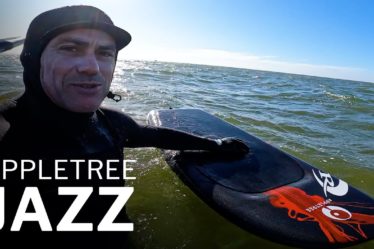