The 2014 Freestyle Junior World Championships began today in Sant Pere Pescador, Spain. In total, 31 heats were finished to secure results for the single elimination in the age groups of girls 13 and under, boys 12 and under, and girls 13-16. The boy’s age group 12-14 made it down to the semi-finals and the boys 15-16 reached the quarterfinals.

This is the PKRA’s second year holding this competition at the idyllic venue of Camping Ballena Alegre in Costa Brava. In total, 46 riders representing 18 nationalities registered to compete. At 12:00, the competitors gathered at the riders meeting with parents and support crew in tow. All were focused and listened intently to the briefing that covered the judging criteria and plan for the day. Aside from the competition, which follows the same format and rules as the regular PKRA freestyle events, the event is intended to be a learning experience for juniors that want to purse a career as a professional rider. Throughout the week, riders will participate in a variety of clinics intended to prepare them for their journey to becoming a professional athlete. By 1:30 pm, the thermal wind was in full cooperation and was averaging 16 to 20 knots with gusts up to 25 knots. The boy’s age group 12 and under was the first to hit the water. Riders used anywhere from 5m to 12m kites. At times, big holes would occur in the competition area as the wind shifted on numerous occasions throughout the day. With a packed beach of parents, friends and onlookers, the young rippers managed to keep their nerves in check despite the fact that for many, it was their first time in such a big event. The level of riding witnessed today was impressive across the board. As the age of the riders increased, so did the variety and technical difficulty of the tricks that were being attempted. Amongst some spectacular crashes, there were many impressive maneuvers landed and the enthusiasm and dedication that was seen from the young riders today shows the promise of tomorrow’s world champions.

Following the end of the day’s competition, the opening ceremony took place to officially welcome the competitors and to consecrate the event. With the smiles of the first day of competition under wraps, riders paraded proudly to the stage and waved flags of their home country as they were introduced by country and name. Tomorrows forecast is calling for strong wind from the opposite direction as today. The single elimination will resume, conditions permitting, after a riders meeting at 9am with a first possible start at 9:30am. 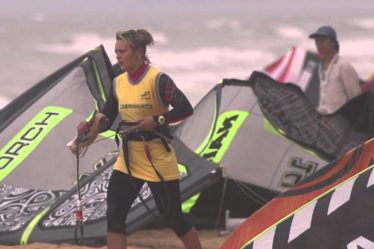