Freestyle and Big Air action kicks off in Porto Pollo

Riders and staff rose to both sunshine and wind this morning.

At the ten o’clock skippers meeting the call was made to start with the Freestyle draw and then move on to the Big Air as the wind was forecast to increase later in the day.

In round one of the Mens Freestyle Corniel was upset by the young British prodigy Tom Bridge, Corniel was sent to round two but managed to take out Hoppe in convincing form securing himself a place in the quarter finals.

Hendrick Burgers also put up a valiant effort against the explosive Dominican rider Martinez, however he fell just short of securing himself a victory. The Aruban was forced into round two where he sealed a pretty convincing win over the Italian rider Cantini with some of his trade mark Front Blind Mobes.

The quarterfinals are where the action will heat up with three man heats all stacked with the best riders.

Both Corniel and Martinez have a great chance of taking out the world championships this event so no doubt the pressure on them will be high. Will there be some more upsets? Tune in tomorrow to find out!

In round one of the Womens Freestyle it was the Brazilian Rosa who showed her dominance, landing clean 313s and S-Bend to Blinds amongst other tricks in challenging conditions. No doubt she will be a favorite for the finals tomorrow.

Magaji the Big Air Womens leader also put on a good display, showing she can hold down a pretty big kite even in the strong wind conditions. The local Italian riders will surely be keen to improve a little upon their performances today, lets see if they can upset the favorites in tomorrows match ups!

The Big Air for both Men and Women was exciting; with the strong and sometimes unpredictable wind putting on a great show for the spectators.

In the Womens Big Air once again tour leader Magaji showed her top form, it will be very unlikely she looses the title tomorrow unless one of her competitors has something hiding under their harness we don’t yet know about.

In the Mens draw Crathern, Hoppe, Martinez and Burgers didn’t disappoint the crowd, with an array of big kiteloops and spins often combined with a handlepass or two in the case of Martinez.

The Mens semi-finals should prove interesting, with a stacked field of two four man heats all the riders will no doubt be trying their hardest to progress to the finals. 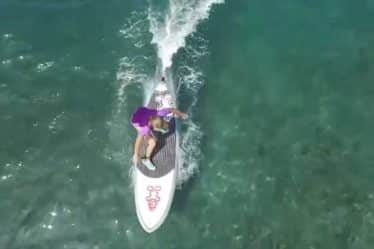