Finals of the 2011 Tenerife Kite Masters

This was a beautiful week of wind and sunshine in El Medano, Tenerife. We’ve had five days of action in which to pick the best four male and best two female riders who got into the finals today. The competition started with 25 knots side shore winds and nice waves rolling into the bay. The Spanish championship saw the amazing come back of local rider Alexandre Bournay (FRA, Naish) who went from last place (he lost his first heat in the singles) to the finals. Alexandre had to fight through a lot of heats to come back and even had to face the leader of the Spanish tour, Alvaro Onieva (ESP, Slingshot). Alvaro secured his heat with a couple of powered moves while Alex had his kite higher and didn’t land all his tricks. Onieva has now won the Spanish title for the year.

Meanwhile Race Director Olaf Van Tol decided to run the Kite Masters heats which would allow four men to advance into the finals. Tom Hebert (FRA, North) was the only rider qualified for the final, five other riders were tight and had to fight for their places. Zoon (NED, Slingshot), Corniel (DOM, Ozone) and Onieva (ESP, Slingshot) in group 1, Langeree (NED, Naish) and Rondina (ITA, Cabrinha) in group 2.

The competition started with Onieva (ESP, Slingshot) against Corniel (DOM, Ozone), both going high and landing a wide variety of tricks. However Alvaro crashed a lot of tricks and Corniel secured his heat with very high jumps and a few nice board offs which gave him the win.

Youri Zoon (NED, Slingshot), current leader of the PKRA, was up next. Youri has been winning every single competition this year and went big in both his heats against Onieva and Corniel. He easily won the four points to get into the finals with Corniel. In the second group Alberto Rondina (ITA, Cabrinha) had to verse the PKRA 2009 World Champion, Kevin Langeree (NED, Naish) who went right away into high jumps. He managed to get away from the old school maneuvers and concentrated mainly on the wakestyle tricks. Rondina executed a perfect crowmobe, low mobe and a flat 5 while Kevin went for a mobe 5, 313 and Blind Judges but with less power than Alberto.

Advancing into the finals are Hebert, Rondina, Corniel and Zoon. The wind got stronger but the riders remained on their 9 and 10 meter kites despite the 25 to 30 knots. This proved to be a cause of difficulty when they attempted to unhook and go for powered tricks. The good news for the public though was that it allowed them to put on a great show; jumping high and gaining hang time. Langeree (NED, Naish) and Onieva (ESP, Slingshot) went out first to fight for the 5th and 6th position. Alvaro landed all his usual mobes even in these strong winds. He also did multiple board offs and a “tic tac”. Meanwhile Kevin was able to land a few technical tricks; he tried a double front mobe and made the second pass but crashed on the landing. The same thing later happened on a mobe 7 which caused him to loose again and end in sixth place.

Tom Hebert (FRA, North) was now starting from scratch in these finals and went against Ariel Corniel (DOM, Ozone). The heat was very tight as both riders went for a wide variety of tricks. Tom crashed a lot of his moves but ended up landing a perfect NIS and a handle board off pass that outshone Ariel’s simple board off and wakestyle moves.

The semis kept going with Alberto Rondina (ITA, Cabrinha) against Youri Zoon (NED, Slingshot). Alberto reckoned that, “I didn’t have a good heat as the wind was a little more gusty than usual and I couldn’t perform my wakestyle tricks as well as I’m used to”. Meanwhile Zoon kept landing trick after trick and advanced into the finals against Tom Hebert.

First the loser’s final for the third place welcomed Corniel (DOM, Ozone) against Rondina (ITA, Cabrinha). You could tell that both riders had learnt from their past heats and were now going for a complete variety of tricks with high jumps and powered moves. The gusty conditions played on Alberto’s mind meaning he crashed a few of his moves. Ariel however landed his powered tricks early enough to then concentrate on flying in the bay of El Medano, he showed a nice long one foot and multiple board offs to win the heat. In the girls division Angela Peral (ESP, North) and Kari Schibevaag (NOR, Ozone) met in the finals. Both girls were overpowered and concentrated on high jumps first, to test out the conditions. Kari then decided to display her new school moves while Angela had a hard time unhooking in these winds. Kari Schibevaag takes the win of this Kite Masters and the two girls are now going to concentrate on their wave riding training.

The final heat of the day was a spectacular show as both riders jumped higher than ever! Tom Herbert (FRA, North) was out on a ten meter and Youri Zoon (NED, Slingshot) on a nine. They both reckoned that they wanted to be overpowered in order to get height but had a hard time unhooking as the wind was now very strong and gusty. Judge Antoine Jaubert explained that Hebert won the old school part while Youri won the wakestyle side of the points. Overall however Youri claimed the victory, something he must be getting used to as this is his sixth event title this year!

Tom was happy with his second place; he lead most of this event with his incredible board offs and looks forward to the next competition. Congratulations to Youri Zoon and Kari Schibevaag! The PKRA will be back soon for the biggest event of the year, in St Peter Ording , Germany, from August 19th to 28th.

View photos of this day of competition 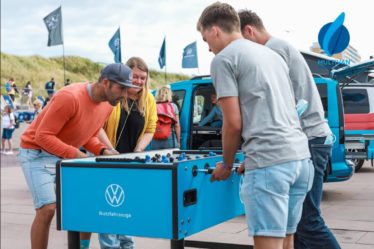