El Gouna was once again graced with good winds to start Day 1 of the Elite League event in Egypt. Slightly stronger and gustier than we have seen on previous days, it was sufficient to complete Rounds 1 and 2 for both the men and Round 1 for the women.

The freestyle action was intense from the very start of Day 1. We witnessed many surprises, a few early exits, and a strong uprising of young kiteboarding talent ready to take on the established veteran riders.

Set Teixeira from Brazil showed us he was on fine form during Heat 1. He put on a confident display of riding throughout, and was extremely happy to pass directly through to Round 3. Luis Alberto Cruz from the Dominican Republic will be joining him, as he also showed determination to skip a round and advance through the competition. The other riders in Heat 1 were not as lucky, and struggled to really pull themselves together for this early start on the water. Alex Pastor, former World Champion, took a heavy crash on his 5th trick attempt and although he managed to relaunch his kite and return to shore, he was in pain and not feeling great, leaving him unable to perform his 6th trick attempt. This meant he had to battle through his next chance in Round 2.

There were several amazing performances in Heat 2, but nothing could quite stand up to Carlos Mario, who managed to land 6 doubles in his 7 trick attempts, with 5 of them scoring higher than 9.5 points. Simply outstanding riding from the current WKL Champion, who looks to be firmly on course for another good result here in El Gouna. Former World Champion Aaron Hadlow also appeared to be in good form for his first heat of the event, despite having only arrived yesterday evening and not having had a chance to really test out the conditions. He came in 2nd, allowing him to join Carlos Mario passing directly to Round 3. Heat 3 was close between all 6 riders, with each of them riding consistently well, but it was Posito Martinez from the Dominican Republic who really managed to set himself apart with plenty of amplitude in his tricks, landing him in 1st place followed by Austrian Stefan Spiessberger who managed to land every one of his 7 trick attempts, included a nice Backside 315. Both of them will pass through to Round 3.

Maxime Chabloz, the young 16 year old who won yesterday’s Qualifier League, rode the heat of his life for Heat 4. Coming up again two former World Champions, Youri Zoon and Liam Whaley, he managed to face the stern challenge with defiance, and his high scores put him in 2nd position. It was Adeuri Corniel from the Dominican Republic who sealed the deal landing every trick attempt and placing himself in 1st position just above Chabloz. Both young riders were ecstatic to advance to Round 3.

The first big upset of the competition took place in Heat 5, which saw former World Champion Youri Zoon get eliminated from the competition, as he failed to really get his focus in place, landing only 2 good scoring tricks from his 7 attempts. This was a great disappointment for the Dutch rider, who had big objectives for this event. Jerome Cloetens from Spain/Belgium was unfortunately in the same boat as Zoon, as he also failed to land enough tricks for him to advance. The two French riders, Val Garat and Arthur Guillebert were both on fire as they gained several high scores, with Guillebert taking 1st place, and Val coming in 2nd just behind him. Both riders will advance to the next round.

“I managed one thing today, and that was to ride the worst heat ever in my 13 years of competing. Props to me. ” Youri Zoon

Heat 6 saw another French rider remain firmly in the lead and that was Nicolas Delmas, who racked up some good tricks including a nice 317 to finish. Alex Neto felt the pressure right until the very last moment of the heat, where his KGB pushed him up into second position, allowing him to advance. This was a great relief for the Brazilian rider who has been dealing with an injury to his knee from earlier training here in Egypt.

Local wildcard Omar Modrek defended himself well during Heat 7, receiving plenty of support from the local crowd on the beach, but it was Alex Pastor who put on an amazing performance after having recovered from his unpleasant crash earlier in the morning. Despite losing his kite during one trick attempt he managed to make an impressive comeback during this round, including a stylish KGB5 and took the win. Second place saw a fight between Robinson Hilario from the Dominican Republic and Simon Lamusse from Mauritius, but is was Lamusse who rose to the challenge and advanced to the next round together with Alex Pastor. Liam Whaley from Spain also managed to have a fantastic run in Heat 8. His signature style and powerful riding won him the heat, just above Christian Tio from the Philippines. Both riders advance to the next round, unfortunately eliminating David Tonijuan and Rens van der Schoot from the competition.

Francesca Bagnoli has certainly proved that she is worthy of the Elite League during her time in Egypt so far. She has been riding consistently well and today was no different, as she stormed through her heat and took 1st place. Isabeau Galiart from the Netherlands rode consistently, and came in 2nd place, but unfotunately Maureen Castelle struggled this first heat as she crashed her 4 last trick attempts, but will still get another chance in the second round tomorrow.

Annabel Van Westerop from Aruba landed an incredible Heart Attack at the end of Heat 2, scoring 9.17 points, and that, combined with her consistent riding gave her a strong lead for the heat. Pauline Valesa followed her in 2nd place, and Lidewij Hartog in 3rd.

“I couldn’t be happier with this first perfect day in Egypt, winning my first heat and receiving the highest trick score of all the girls!” Annabel Van Westerop Paula Novotna from Czech Republic was on fire for Heat 3, with her final KGB scoring her 9.13 points. She was delighted to finish in 1st place, followed by Spanish Rita Arnaus, who also landed some powered tricks including a nice Heart Attack, and Therese Taabbel, Danish Champion, followed in 3rd.

“Today was amazing. I’m stoked with my riding, and with the great support from my North Team mates on the beach. I am super excited for tomorrow.” Paula Novotna The Elite League competition continues tomorrow, with the skippers meeting called for 8.30am and the first possible start at 9am. 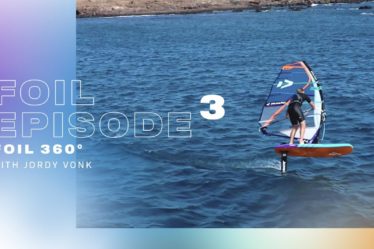