Costly mistakes by many of the favourites to take the titles at the 2018 TwinTip:Racing (TT:R) Slalom Youth World Championships in Hainan, China, threw up a few surprises at the top of standings after the first day of racing.

After two frustrating, windless opening days, many of the young athletes seemed over-anxious and committed the cardinal error of crossing the start-lines early and were eliminated from heats or the all-important elimination round decider. The pressure was magnified by a field stacked with the strongest TT:R talent as athletes from around the globe have gathered to fight for the eight remaining places for kiteboarding’s first medals at the Youth Olympics Games (YOG) in Argentina in October. Day three of the competition being contested on the warm waters of Bo’ao’s Asia Bay finally served up the conditions the 38 boys and 24 girls from 26 countries need for the high-octane downwind slalom discipline.

The breeze quickly built from 12kts eventually hitting more than 20kts by mid-afternoon, seeing most of the competitors switch from their largest 17m or 19m kites to 11m kites as the scores of short, sharp races progressed.

As the tropical breezes freshened the race committee was able to introduce obstacles to be jumped on two of the course’s five legs, with the result that many of the competitors incurred penalties that further juggled the order. But it was the mistake of pushing too hard at the start and crossing the line early that was the biggest problem, particularly in the girls’ fleet when sometimes most of the competitors in the six-person heats were disqualified.

Spain’s Nina Font Castells, the current European TT:R Youth Champion, was the exception. She held her nerve and proved consistently quick to give her the overnight lead with a first and second spot in the crucial elimination round deciders. “I’m doing well and I’m happy to be in this position,” she said. “But it’s not over yet, so I don’t want to get too excited. I will just keep my focus. I know there are a lot of good racers in the fleet, like the two Chinese girls. Other girls are making mistakes, like going over the line early or getting penalties.”

The leader in the boys’ division, Germany’s Xaver Kiebler, seemed even more surprised by his day’s performance that left him top of the rankings, but no less delighted. “Today was really, really good for me,” he said. “I think there are a lot of people making mistakes. I’m in first place but I feel I’m a little bit lucky to be there. I got a second and a fourth in the elimination decider, but I’m on top. A lot of others had OCS [On Course Side disqualifications]. So it’s better to take a bit more time, even if you start a fraction later.”

China’s Haoran Zhang suffered from inconsistency, winning the first elimination round final to the delight of the cheering local support on the beach, only to fail even to make the second round final.

Nevertheless his performance was enough to leave him in second place, just one point ahead of the Dominican Republic’s Lorenzo Calcano, who was delighted with his showing against such a strong fleet. “I’m really happy,” he said. “I feel I’m very fast on the start. My main thing is that I don’t get nervous. I’m not afraid of the other racers, even though many of them are very good. Now I just have to stay focused.” 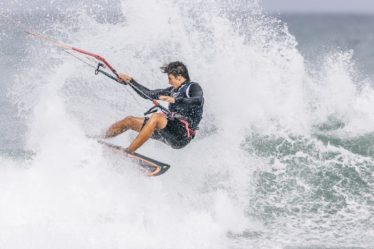