Day 5: Kiri Thode and Sarah-Quita Offringa stamp down their authority on Lac Bay and claim their crowns as King and Queen of Bonaire!

On the fifth and final day of competition, Bonaire erupted into a freestyle frenzy, as the sailors brought everything they had to the table in an attempt to progress through the double elimination.

With the Bonaire trades blowing around 25 knots Phil Soltysiak (Starboard / Dakine) exploded out of the gates in two consecutive heats, catching riders off guard with his consistent switch flakas and perfectly polished burners. However Soltysiak’s winning streak came to an end when fell victim to Dutch freestyle whiz kid Davy Scheffers (Tabou / Gaastra) in heat 44. Scheffers sailed his routine of super smooth double maneuvers and controlled konos ensuring the judges awarded him the highest marks.

On the other side of the elimination local hotshot Youp Schmit (JP / NeilPryde /Dakine) ploughed through Julien Mas (Hot Sails / Patrik) and Amado Vrieswijk (Starboard / Hot Sails) performing enormous culos and shaka flakas in front of the judges’ tower to secure his place in 11th at this event. Schmit was finally stopped in his tracks in heat 45 against local hero Tonky Frans (Tabou / Gaastra).

Tonky took the day by storm and blew the judges away with his diverse array of tricks and his Caribbean smooth style. Frans appeared to be unstoppable claiming victory in his heats against Jose ‘ Gollito’ Estredo (Fanatic / North) and Scheffers with a 5-0 decision from the judges each time. There was only one man that could put a halt on Tonky’s progress, and that was his brother Taty Frans (Starboard / MauiSails / Mystic). Tonky fought hard with a Kabikuchi and a Future, but his efforts were not enough as Taty sailed the perfect heat, granting his pass into the next round. It took an amazing routine from Kiri Thode (Starboard / Gaastra) to put an abrupt end to Taty’s hopes, blowing him out the water with his trade mark air bob’s and the largest kono of the competition.

The men’s final boiled down to two mind blowing two heats between local favorite Thode and Belgium contender Steven Van Broeckhoven (F2 / Gaastra). Having won the single elimination Van Broeckhoven held the advantage over Thode and had to be beaten twice to lose the second double. Thode was hungry for a final victory and sailed the first final like a true champion pulling a series of mind-boggling combination moves. Van Broeckhoven replied with his trade mark style throwing huge culos and a flaka ponch, however a crash on the reef left him on the back foot, leaving Thode with the advantage to take the first blood.

Motivated by his home fans and with event title already secured, Thode went on to earn his crown as King of the Lac Bay pulling a gravity defying Kabicutchi and an unbelievable Grubby Ponch. Van Broeckhoven fought tooth and nail to hold his ground, but with his homes fans’ cheering his every move Thode was on an unstoppable roll and finished the event with an undisputed victory.

“I am ecstatic to have won on my home spot, it was an amazing event and the wind was perfect. A lot of the others competitors can do all the moves here, I was really pushing myself to show everyone what I can do and I am extremely happy with my sailing. I am really excited for the next event in Aruba.”

Heat 46 in the women’s double elimination saw Xenia Kessler (JP / MauiSails) and Mio Anayama (NeilPryde) work their way past Maxime Van Gent and Daniela Simal with a series of spock variations and an inspired clean flaka from Kessler.

Next up was Anayama versus Kessler; Anayama opened the heat with a spock 540 but then failed to land a number of critical moves. Kessler took the advantage with her forward loop securing her place in the next heat to challenge Arrianne Aukes (RRD / Simmer / Dakine).

Kessler put up a great fight and attempted to match Aukes for every move; however Aukes played her consistent card and barely dropped a trick throughout the heat, earning her pass into the next round to face Yoli De Brendt (Fanatic / North).

De Brendt disposed of Aukes with her more varied repertoire of switch maneuvers and a double flaka to seal the deal, and then went onto face Swiss freestyle specialist Laure Treboux (Fanatic / North).

Treboux was on fire in the heat and left the water steaming. She garnished every maneuver with an extra element of style, nailing her moves one handed or fully planning. The judges recognized her efforts and rewarded her with a place in the final.

Bonaire witnessed one of the finest women’s finals of all time. Sarah-Quita Offringa (Starboard / Gaastra / Mystic) and Treboux took to the water for the fourth time this week. With one more opportunity to break Offringa’s stronghold on Lac Bay and the top spot, Treboux pulled out all the stops. On recognizing Treboux’s effort Offringa decided it was time to reveal her big moves. The end result was a spectacular show and a final to remember as both women pulled out all the stops for the cheering crowds. Despite Treboux’s fighting every inch of the way, Offringa squeezed past Treboux with her incredible moves and took her fourth final win at this event and the title of event winner.

“I was quite nervous for this event and on the first day I didn’t sail as well as I wanted but I still managed to win. Slowly it got better even though the wind was light. Today was the cherry on top of the cake because the wind was really strong. In the final I was powered up on my 5.2 sailing against Laure; usually we have a really good time when we are sailing. I think it was my best heat ever I landed a double spock, a kono, an air funnel and a funnel diablo. I was really happy, I saw that Laure was sailing really well and that motivated me even more so, I think this was one of the best women’s finals ever. I am really excited for Aruba, the forecast looks great.”

Having completed the official competition and the wind still blowing a gale the judges took the opportunity to run a super session for the crowds on the beaches. The sailors were allowed thirty minutes to try performing their most outrageous and impressive moves. Alongside some big crashes huge culos, konos and burner’s went down. The victory was claimed by Anthony Ruenes with his super high and stylish no-handed flaka.

Back on the Road

The PWA crew will now make the short trip over to the dazzling island of Aruba for round four of the freestyle and slalom world cup taking place on 19th-26th June.

For information on all the entrants, and to keep up to date with every piece of the action, navigate to www.pwaworldtour.com 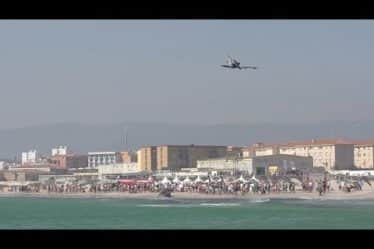