The 5th edition of the Dakhla Festival 2011 in Morocco was a great one : moderate to strong winds in the lagoon for the long distance race – 25 and 40 km of pure downwind, and logo to high masts waves on the ocean side during the whole week.

From 22nd to 27th of February, about 30 international surfing, windsurfing, SUP and kitesurfing stars were the guests of a multi watersports event in South Morocco. During 6 days, Dakhla was the host city of all these sports and for the windsurfing part, it was a good opportunity for french Fanatic & North Sails teamriders Gerald Pelleau and Bieuzy Mauffret to show their speed potential on two incredible long distance races launched in the beautiful lagoon of Dakhla’s peninsula.

In 20 to 30 knots of wind and a difficult run with snaky chop and strong current in the middle of bay, Pelleau and Mauffret were facing another fast rider, Venezuelan Guadagnino. In the end, after 2 races, Pelleau and Guadagnino both take the first place while Mauffret got 2nd !

On the ocean side, in the waves of worldclass spot Foum Labouir, the frenchies could take advantage of insane wave conditions. Perfect side to side offshore moderate wind, beautiful long and glassy rights breaking over the point… An awesome playground to have fun and enjoy some sessions with their wave equipment or on their SUP between 2 wave contests where Moroccan locals from Essaouira, Abdel Fettah and Abdel Ouahed Elabdi, could show up their skills with their NorthSails equipment.

This was a very nice experience for Mauffret and Pelleau who came back home yesterday with loads of good images and souvenirs in mind… and great results on the Dakhla 2011 Long Distance! 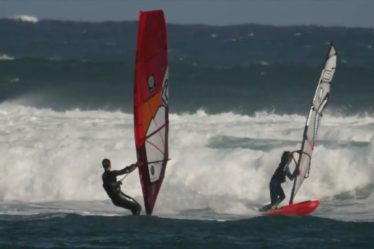