It was time for the Copa ONA at El Yaque Beach again, the well known windsurf contest at the windy Caribbean village and Gollito Estredo and Yoli de Brendt were both keen to defend their titles from 2010, possibly in Slalom, Freestye and Long Distance.

Four times World Champion in Freestyle had not an easy time to get into the final of his favourite discipline, but with some awesome performances he made it all the way up. So did Deivis Paternina, who was on fire and ready for the battle with Gollito. The final was a fireworks of New School Freestyle Tricks, but whatever Paternina landed in perfect execution, Gollito just made it higher and more extreme and without a doubt the cup was well deserved, while Deivis Paternina was happy with his second place.

Yoli de Brendt won every single Freestyle Contest in El Yaque in the past years and in 2011 that shouldn´t change. With solid heats she jumped herself onto the Top Place of the Freestyle Podium once again.

Time for Estredo to get his new North Warps and Fanatic Falcons ready, a gear which made him fly over the water in the past training days and just before the start of the long distance race with a full speed downwind run towards the crowds at the beach he showed that he wanted the Long Distance Race title. The full fleet race, which should lead the racers almost all the way to Coche Island and back to El Yaque, so around 18 kilometers, started with good 27 knots windspeed and a Gollito Estredo flying over the starting line and around the first jibe mark before the fleed went out far to not be seen for a while. Unluckily when the racers came back towards El Yaque, Estredo had lost his leading position in a massive windhole but was fighting hard to catch up with now leading Alexis Carache. In the end he finshihed on second place.

During the 2010 Venezuelan Slalom Season a tough battle between Gollito and Diony Guadagnino decided about the Championchip which in the end went to Gollito Estredo and also in the first events of 2011 it has been the same story. So no big surprise that the two friends flew around the marks with full speed to fight for the number one spot of the podium. A massive crash from Estredo and another one from Guadagnino made the races even more exciting, as the the rest of the fleed was catching up in the overall rankings, but until the last heat Guadagnino kept his lead in front of Estredo who just risked it all in the last Heat of the Competition, and it was worth it. With another first place in this last heat he secured first place of the Slalom competition with Guadagnino and Carache in his neck.

Also women Vize World Champion in Freestyle Yoli de Brendt tried to find her luck in the women Slalom, only that she couldn´t find the gear and so went with her Freestyle Skate 90 around the course but still was able to win one or the other race. and finish second overall in Slalom.

Gollito Estredo: „Freestyle at my home spot was just great fun, to make some show for my people and all the spectators at the beach and I really liked the Slalom contest, even when it was a hard fight, but my new Falcons and the new North Warp are just amazing, for sure the fastest setup I have ever used. I was on the 2011 Fanatic Falcon 101 and 111 and the 2011 North Warp 7,0m² and 7,8m².

Yoli de Brendt : Of course I wanted to defend my Freestyle title here at my home spot and I tried everything to show also the Spectators the women Freestyle skills. The Slalom Contest was fun, also when i had to use my Fanatic Skate 90 and the North Dukes for the racing, but it was nice to see that even with that equipment I could win some races.“ 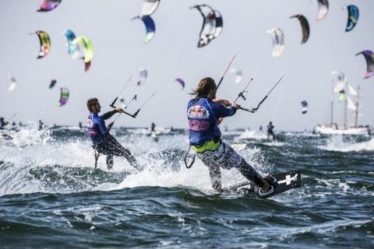 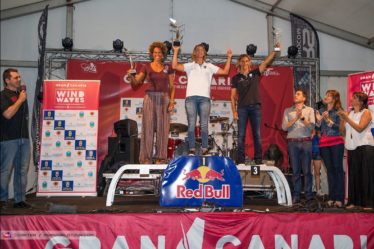