The well known slogan for the locals: “Liepaja is the city, where the wind is born!” proved 100%, again. Sunny, warm and windy conditions from 15 – 30 knots(!) dominated three day regatta.

“The weather was great, but at the same time challenging and demanding, as always in Liepaja! All classes – Formula Windsurfing, Formula Kite, RS: X, Raceboard and Techno 293 had a chance to hold as many races as possible,” said Mr. Juris Vasioleks, the Latvian event organiser.

The regatta was kicked off on Friday by windsurfer classes Formula Windsurfing and Kite Formula, Techno 293, Raceboard and RSX, who enjoyed the sunny weather and strong wind conditions. Estonians dominated in Kite class, but Latvians dominated in all Techno 293 classes (3,5, U13, U15 and U17), as well as in Raceboard, RSX and Formula class. Four races for Formula and Kite class and three for Bic, Raceboard and RSX had been sailed.

On Saturday, the weather was rather tough. The wind was up to 30 knots. It was too strong for windsurfer classes. Only, 2 races were managed for Kite class.

The last day of regatta came exactly as wind forecast predicted; from 17 knots at beginning up tp 25-30 knots at the end! After the decisive races, the winners of the Latvia event are the following :

Many thanks to the event crew : Juris Vasioleks, Janis Dale, Janis Jekabsons, Arnis Krauklis and others, who helped to organise successful and exciting event. 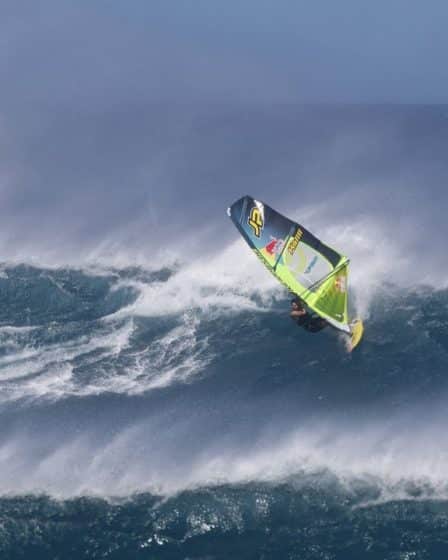 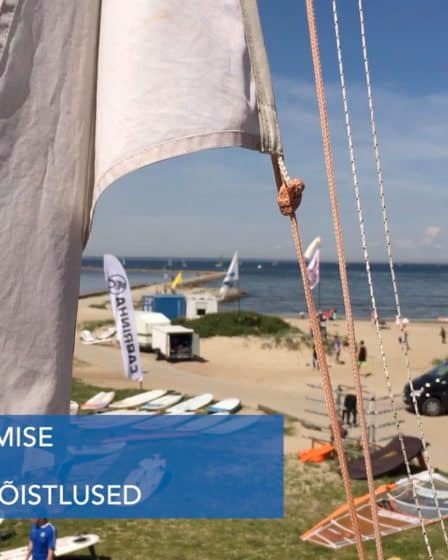 Regatta’s director Erno Kaasik said that he was satisfied with the weather conditions and arrangement of regatta. “We are glad that NeilPryde Baltic Cup Estonia is increasingly popular among the windsurfing and kitesurfing top-riders. The weather was great as usual in Pirita and all classes – Formula, Formula Kite, NeilPryde RS:X, Raceboard and Techno 293 – had a chance to hold several races,” said Mr Kaasik.

Friday was warm, calm and therefore more relaxing day for all competitors as wind never arrived. The regatta was kicked off on Saturday by windsurf classes Techno 293, Raceboard and RS:X who enjoyed the sunny weather and light wind conditions. Latvians dominated in all Techno 293 classes (U13, U15 and U17), as well as in Raceboard class. After the first races, Estonian Olympic windsurfer Ingrid Puusta was the leader of RS:X class. Unfortunately, unstable and bumpy wind on Tallinn Bay did not allow to hold the Formula and Formula Kite Class races that day.

The last day of regatta surprised participants and organizers with excellent racing weather. The wind of 5-10 m/s enabled races for all classes. After the decisive races, Latvians won the first place of all Techno 293 classes, Raceboard class and Formula. The winner of Techno 293 U13 was Davis Mazais, U15 – Matiss Punte and U17 – Anija Punte. In Formula, Janis Preiss was unbeatable by winning all five races, followed by Estonian Martin Ervin and Latvian Janis Rencis. In Raceboard class the winner was Juris Dreimanis. Estonians were victorious in the Formula Kite and RS:X classes. After the final races of regatta, Madis Kallas won the Formula Kite, followed by Ranno Rumm and Silver Kattai. Ingrid Puusta was the winner of RS: X class, while second place belonged to Riho Roomet Pung and third to Latvian Namejs Dreimanis. NeilPryde Baltic Cup is an internationally recognized Formula Windsurfing class racing series that gives points in the Formula world ranking. The series reaches the peak on 4–6 August in Latvia, where the Baltic’s best surfers will be crowned.

You can watch the live broadcast held on final day Techno 293 and RS:X final races HERE
Event video is HERE
Event photos are HERE
More photos and videos on the event FACEBOOK

The last six days in Ulsan, South Korea, have ultimately proved to be highly frustrating with the wind either remaining marginal or extremely gusty and shifty throughout. The penultimate day provided the best of the conditions, which allowed a result to be gained in the women’s fleet with defending world champion Sarah-Quita Offringa (Starboard / NeilPryde / Maui Ultra Fins) taking the early season advantage.

Sarah-Quita Offringa made the perfect start to her title defence as she led from start to finish in the one elimination completed and she’ll be happy to have escaped the tricky conditions with victory heading into Japan.

Lena Erdil (Starboard / Point-7 / AL360) chased home Offringa in second place, and already at this early stage of the season it looks as though it could be another fight for the world title between the Aruban and the Turk. Erdil looked blisteringly quick on the straights and it will be interesting to see the title race develop when they have more races under their belts.

Marion Mortefon (Fanatic / NorthSails) returned to form to record her best result since 2015 and she’ll be delighted with her third place to kick off the season. The 25-year-old showed off textbook gybes to out manoeuvre her opponents in the final and she’ll be a threat again next week.

It was damage limitation for Delphine Cousin Questel (Starboard / S2Maui) after the two-time world champion missed out on the winners’ final after snapping her outhaul on day five. The 25-year-old did just that by winning the losers’ final, but realistically she can afford no more mistakes in the remaining three events if she wants to challenge for a third world crown.

Despite the men’s fleet being whittled down to the top 16, no result stands as it was not possible to complete the winners’ final, which will leave a bitter taste in the mouth for; Sebastian Kördel (Starboard / GA Sails), Pierre Mortefon (Fanatic / NorthSails / Chopper Fins), Taty Frans (Starboard / GA Sails / Mystic), Maciek Rutkowski (Tabou / GA Sails), Matteo Iachino (Starboard / Point-7 / Shamal Windsurfing Sunglasses), Julien Quentel (Patrik / Avanti), Marco Lang (Fanatic / NorthSails) and Cyril Moussilmani (99NoveNove / Severne) – all of whom would’ve been guaranteed a place in the top 8 or better.

Ross Williams (Tabou / GA Sails / Mystic / Shamal Windsurfing Sunglasses) – world No.3 last year – will breathe a sigh of relief that his quarterfinal exit has not been punished and the Brit can head into Japan with a clean slate like the rest of the fleet.

In the end reigning world champion Iachino won the heat ahead of Quentel, Lang and Moussilmani, but in reality almost every sailor had been in the qualifying places at one time or another in the previous attempts. 23-time world champion – Antoine Albeau (RRD / NeilPryde) – will be glad that the result did not stand after he was disqualified for a premature start when pushing in extremely light airs.

Emotions will vary greatly between the sailors depending on where they were in the elimination ladder, but ultimately everyone will now go into the next event in Japan on a level playing field.

To view previous news from South Korea — including the live stream, elimination ladders, entry list, images and live ticker simply click HERE and scroll to the bottom of the page.

Where’s Next on the PWA World Tour?

The second installment of slalom is just a few days away and the best slalom sailors in the world will be taking the short plane journey to Japan tomorrow to get ready for the Fly! ANA PWA World Cup, which takes place at Tsukuihama Beach in Yokosuka City between the 11th-16th May. Make sure you tune into www.pwaworldtour.com to follow all of the developments live from Japan – where hopefully the wind gods will be more cooperative. 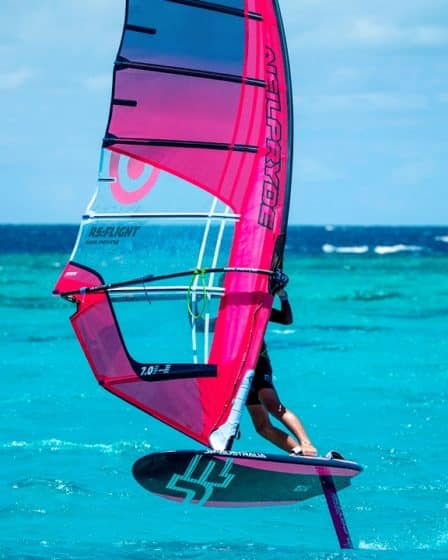 “Once you have tasted flight, you will forever walk the earth with your eyes turned skyward, for there you have been, and there you will always long to return.”

Take to air with the all-new RS:Flight collection from NeilPryde — an experience like nothing else. Ushering a new era in windsurfing performance and fun, the RS:Flight program will elevate your experience to a new level with a dedicated foiling and freerace sail and two options of wind-foils: full carbon and aluminium.

The RS:Flight Sail is a high performance windsurfing sail based on RS:Racing design and specifically developed to perform both on wind-foil and slalom boards.  This sail is an evolution of the RS:Racing LT1, and is designed on the concept of real world racing combined with key foiling features. Compared to a pure racing sail, the RS:Flight has a higher aspect ratio, shorter boom and increased foot size to accommodate vertical rake when foiling.

The RS:Flight F4 Foil is a no-compromise, performance carbon foil designed in collaboration with F4 USA. This foil is an evolution of the proven F4 windsurf hydrofoil design, already considered as the best wind-foil in the market with unmatched hydrodynamics.

The RS:Flight AL Foil is an exceptionally durable high-performance modular aluminium/G10 wind-foil designed with emphasis on control, stability and early takeoff. Perfect as a starting foil to experience your first flights, it also delivers plenty of speed and upwind performance for more advanced riders.

Find out more via the links below.

RS:Flight. There’s something in the air.

After a week of light winds the trades finally returned on the last day of the 2016 NoveNove Maui Aloha Classic to provide a pulsating end to the event, which saw Team Pryde’s Sarah-Quita Offringa fight her way back through the d…

At the final day of the DAM-X event at the Zeil- and Surfcentrum Brouwersdam the wind unfortunately never kicked in properly so the official freestyle competition had been called off by race director Tom Hartmann just around 1.00pm…

The women’s wave title race once again looks as though it’s going to go all the way between — Iballa Moreno and Daida Moreno — after another all Moreno twins final in Sylt. Daida came into the third event of the year leadin…

The final day of the 2016 Hvide Sande PWA World Cup saw an intense finish to the event even though it wasn’t possible to complete any further racing. During the morning there was barely a breath of wind, but during the afternoon …