It was a game of thrones of sorts in the final of Red Bull King of the Air 2016, as the 2015 defending champ, Aaron Hadlow out-gunned previous champions, Hawaiian Jesse Richman (2013); Kevin Langeree from the Netherlands (2014) and first-time finalist Reno Remeu to claim back-to-back wins. The elements at Cape Town’s Big Bay rose to the occasion too – the fourth time this extreme big air kiting contest has been held here – with solid swell (four- to six-foot) and howling Southeasterly winds offering classic ramps for the riders to perform on. Romeu showed a lot of heart but was flagged-out first and it was left to the three previous champions to battle it out. Their contrasting styles showed throughout the day, but nowhere more so than when it was all on the line in the final – the clinically technical Hadlow vs the stylishly polished and consistent Langeree vs Richman with his gung-hu, all-or-nothing approach. “There is no better way for me to start the year,” Hadlow commented afterward. “The energy from the beach was just insane – there were so many people were on the ground and support was amazing.” “The waves made the biggest difference it was the windiest I’ve ever seen in it here in Cape Town,” he said, “but just having those big waves just makes you go so much higher and makes your timing that much trickier.”

“I probably didn’t go as high as I did in the past but I did have a couple of big ones out the back and just tried to mix it up and big kiteloops and grabs and again I was possible to do a big kite loop with a handle pass and a megaloop I didn’t manage to do a couple of moves I had planned,” he said.

Head judge Alex Vliege commented: “This was by far the closest final we’ve ever had at Red Bull King of the Air in Cape Town. It came down to the maths, taking into account each rider’s three best tricks and the event judging criteria. It really was a tough one, each of them have totally different styles, but Aaron’s variation is what won him the title.” 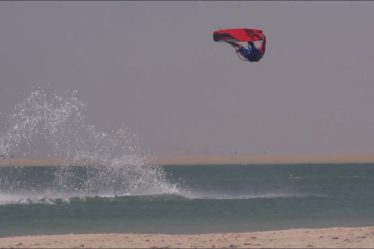