The fourth day in Fuerteventura kicked off to a tense start, with light winds blowing over the competition area and relaxing tunes being played in the main tent. The remaining five men and four women were placed on standby, to anxiously wait for the conditions to improve.

With little change in the wind by two o’clock the sailors began to panic that they would not be able to complete the competition, however the sailors were blessed with breezes up to twenty knots for the final flurry of action in the double elimination.

Head judge Duncan Coombs wasted no time in sending out the brothers from Bonaire, Taty Frans (Starboard / MauiSails / Mystic / Maui Ultra Fins) and Tonky Frans (Tabou / Gaastra) to warm up and test the conditions. The brothers launched into action straight off the beach and the judges declared the conditions suitable for a fair competition.

Picking up the action at heat forty-eight, Taty and Tonky went head-to-head. Disaster struck for Taty in the opening minute of the heat when his downhaul rope snapped, allowing Tonky to clock up a number of critical moves whilst he fixed the problem. Taty was back on the water and fighting in no time landing an enormous future into flaka. However the fault had obviously messed with his mind-set and he struggled to land a few key moves, opening the door for Tonky to advance into the next round.

Tonky went on to face, fellow Bonaire teammate, Kiri Thode (Starboard / Gaastra). The sailors performed their finest moves, launching into gravity-defying konos and super smooth shaka flakas in quick succession. This early all-out attack meant both sailors had filled their score sheets before the nine minute heat was completed. Incredible sailing from both parties ensured the scores were particularly close, with Thode squeezing past by just half a point.

With a sacred place in the final up for grabs, Steven Van Broeckhoven (F2 / Gaastra) and Thode opened the heat with all guns blazing. Van Broeckhoven wowed the crowds with an ankle dry culo, whilst Thode opted for a double air funnel and an incredible triple spock. The astounding spectacle continued throughout the heat resulting in the scores being ridiculously tight with Van Broeckhoven narrowly taking the win with a 3-2 decision from the judges.

Having defended his second place, and earned a position in the final Van Broeckhoven was fired up when he faced the four times world champion Jose ‘Gollito’ Estredo (Fanatic / North). Estredo sailed a perfect heat landing all of his most daring moves, and filling his score sheet in record time. However Van Broeckhoven timed his moves to perfection nailing a monster culo and massive konos on both tacks in a desperate bid to win the heat.

Van Broeckhoven was awarded the win with a 4-1 decision from the judges. With one victory each the pair would have to go head-to-head one more time to declare who would be the overall event winner.

The crowds on the beach fell silent as the sailors lined up and waited for the green flag to be raised. Estredo was first to move landing a clean spock-culo in front of the judges. Van Broeckhoven fought back with a dry ponch and a colossal shaka flaka. A mind-blowing nine minutes of action flew by as the world’s best freestylers performed every move possible to impress the judges.

Fuelled by adrenaline the sailors ran up the beach to hear the results announced. Van Broeckhoven was awarded the victory and the event title with a 3-2 decision from the judges.

Venezuelan Yoli De Brent (Fanatic / North) and Xenia Kessler (JP / NeilPryde) were the first women to take to the battle arena, fighting for third place. The duo looked fairly evenly matched both landing clew first spocks and loops and flakas. However De Brent was able to take the lead separating the pair with her switch moves, seeing her advance to face her teammate Laure Treboux (Fanatic / North).

Treboux was on fine form throughout the heat landing a fully planing grubby under the judges’ noses, De Brendt fought back hard landing a forward loop and a flaka. It came down to the final minutes of the heat when Treboux upped the game landing a one handed clew first spock and a one handed flaka to secure her place in the final.

Just nine minutes separated Sarah-Quita Offringa (Starboard / Gaastra / Mystic) from claiming her third event crown and her fourth world champion title. Offringa didn’t let the pressure affect her performance and she sailed an inspiring heat landing an incredible set of moves. Treboux upped her game, landing a funnel and a switch kono, but she was unable to match the power and diversity of Offringa moves. Offringa was awarded the victory to the cheers of the crowds on the beach after an amazing season where she was unbeaten on the water.

With the double elimination completed and the winners announced the sailors were released for the day. The final day of freestyle will kick off tomorrow morning with the skippers meeting at 11:00am with the first possible start to competition at 11:30am. 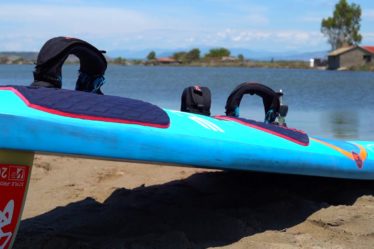