Day five: The fifth and final day for the freestyle fleet in Fuerteventura finished on a high, seeing Taty Frans and Laure Treboux spin their way into first place in the super-session.

The sailors were greeted with winds blowing 20-25 knots for their final day in Fuerteventura. With a result secured, the victors crowned and not enough time to run another single and double elimination, the judges opted to run a crowd pleasing super-session to take advantage of the great conditions.

The rules were simple for the super-session, the sailors were provided with a small square to perform their moves on the inside close to the crowds. They were allowed three attempts to take it in turns and pull their most radical maneuvers to wow the judges. The two sailors with the highest scoring moves would advance into the final.

Tonky Frans (Tabou / Gaastra) opened the men’s heat with an enormous crash on a fast willy skipper attempt. Kiri Thode (Starboard / Gaastra) was first to land an incredible burner into flaka seeing him earn particularly high scores from the judges. Yegor Popretinskiy (JP / NeilPryde / MFC) was close behind landing a super smooth double spock. Next to wow the crowds with a huge crash was Israel’s Yarden Meir (Fanatic / Simmer) with his huge no-handed burner attempt. Tonky closed the heat with a fifty meter willy skipper planing the whole way across the beach. Thode and Popretinskiy were awarded their pass into the final.

Bonaire’s Bjorn Saragoza (Starboard / Hot Sails) pulled the first move launching into a high switch kono. Phil Soltysiak (Starboard / Dakine) was close behind landing one of his own. It was then up to Taty Frans (Starboard / MauiSails / Mystic / Maui Ultra Fins) to up the game, landing a perfect spock-culo. Loic Spicher (JP / NeilPryde / MFC) tried to match him with a floaty kono, however Soltysiak snuck through at the end with a really fast burner. Taty and Soltysiak were granted access into the final.

Four times world champion Jose Estredo (Fanatic / North) spun around a super clean spock-culo to open the heat. Anthony Ruenes (Tabou / Simmer) went for his trademark regular chachoo but crashed hard, closely followed by Brit Andy Chambers (JP / NeilPryde) going for a double spock. Ian Mouro Lemos (JP / NeilPryde) upped the game landing a super technical switch chachoo diablo, and Florian Wegerer pulled an ankle dry one-handed burner. Chambers pulled off his double spock planning out on his third attempt, however it was too late and Estredo and Wegerer were awarded with their entry into the final.

Venezuelan Yoli De Brent (Fanatic / North) opened the women’s heat with a technical clew first switch Vulcan, whilst new girl to the tour Danielle Lucas (Severne), and the world champion Sarah-Quita Offringa (Starboard / Gaastra / Mystic) both caught the rail and got wet. Mio Anayama (NeilPryde) then upped the game with a fast forward loop. Russian Svetlana Martynova went for her e-slider but unfortunately the wind wasn’t playing ball and she was unable to complete it. De Brent was quick to land one of her own e-sliders putting her in the lead. However Offringa was on the rampage landing a switch chachoo diablo and a one handed funnel with a wave to the judges. Martynova landed her super smooth e-slider on her third attempt and Swiss styler Laure Treboux closed the heat with an incredible one handed grubby diablo.

The judges chose a slightly different format for the final to make the action all the more impressive. The sailors were allowed four attempts to perform their tricks, however it was compulsory the fourth trick was a forward loop .

The eight sailors took to the water excited about the new format. Thode opened with a clean double spock. Popretinskiy followed him, with the most impressive crash in the heat, going down hard trying a chachoo crash. Taty stuck to his opening heats tactics landing a perfect spock-culo. Van Broeckhoven nailed a burner into flaka, followed by the young Belgian Van der Eyken with his burner flaka. Estredo played it safe landing a burner. The second round of moves witnessed Popretinskiy dominate with his super stylish o/h chachoo. Estredo land a spock-culo of his own and Wegerer going big trying a no handed burner. The third round saw Thode land his own spock-culo, Soltysiak landing a fast switch chachoo, Estredo landing his second spock-culo of the heat and Van der Eyken floating around a kono. To close the heat the sailors launched into their own variations of the forward loop with Soltysiak being awarded the highest points for landing planing.

Obviously enjoying their moment in the limelight and the cheers from the beach, the sailors closed the heat with an eight man synchronized forward loop.

Tomorrow we hand over the baton to the men’s slalom fleet, for their first day of competition. Racing is scheduled to start at 10:30am following the skippers meeting at 10am. 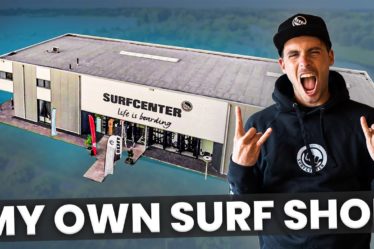