Day 1: Bonaire is blessed with outstanding conditions for the opening day of competition seeing Kiri Thode and Sarah-Quita Offringa fly their way into first place.

Consistent cross-shore winds and blazing sun allowed the competitors to explode into action from the word go. Competition continued throughout the afternoon and the world best freestylers wowed the Caribbean crowds all the way through the first single elimination.

Once the formalities of registration were out the way and the skippers meeting completed, head judge Duncan Coombes wasted no time in getting the 39 men and 8 women onto the water and the heats underway.

Kicking off the day it was down to many of the un-seeded local sailors to make their debut performance on the PWA world tour. Choco Frans (F2), Amado Vrieswijk (Starboard / Hot Sails) and Hendryck Balentien (JP) took down their opponents and made it through to the second round, displaying a whole array of new school moves and proving that living in paradise does wonders for your windsurfing.

The big drama of the day came from heat 9 between Philip Soltysiak (Starboard / Dakine) and Caesar Finies (Starboard / NeilPryde). The sailors put up a fair fight each pulling big Culos and Konos ensuring the points were going to be tight. When the results were revealed it was announced that Soltysiak had not made it through to the top 16. Unhappy with his performance Soltysiak confronted the judges for answers, and discovered that it was not his sailing that had been at fault but a miss calculation on the score sheets. Soltysiak continued his rampage all the way to the top 8

Special mention has to go to Dieter Van der Eyken (Starboard / Severne). In round three he sailed like it was his last time, and managed to clock up a huge variety of moves in his heat against Scheffers, granting his passage into the top eight.

As the semi-finals approached the regular big names featured in the top four. Having breezed through their earlier heats it was time to take things seriously. Steven Van Broeckhoven (F2 / Gaastra) took on the mighty Kiri Thode (Starboard / Gaastra), both sailors worked hard as the wind dropped off slightly. Van Broeckhoven pumped his way into a Culo, only motivating Thode further, forcing him to bring out a perfect Burner 900. Estredo racked up his points but it wasn’t enough against Taty Frans (Starboard / MauiSails, Mystic) on his home turf.

It came down to two local sailors Thode (Starboard / Gaastra) and Taty Frans (Starboard / MauiSails / Mystic) to fight it out in front of their fans, both comfortable on their playground and not wanting to disappoint the home crowds it was time to turn their sailing up a notch and bring out the big guns. In an attempt to outdo each other the moves got more and more daring, Thode opened with a Culo, followed by a double e-slider from Taty. The game of one up man ship went on until Thode claimed the move of the day with a huge Kabikuchi securing his place as best in Bonaire.

The female fleet made up of 8 sailors got off to a flying start. Laure Treboux (Fanatic / North) looked dialed into the conditions from the very beginning steaming her way through her first and second heats taking down Mio Anayama (NeilPryde) and Yoli de Brendt (Fanatic / North) with her fully planning spock 540’s and Grubbys.

Treboux and Offringa made their way to the winner’s final, having posted consistent performances throughout the competition. Treboux reeled out her moves like clockwork whilst Offringa went for the high-risk power moves. Crashing hard Offringa allowed Treboux to open the gap early on, and take the lead with her consistent spocks and switch stance maneuvers. However the high risk strategy came together when she bagged herself a perfect Kono and Bob in the closing seconds, squeezing her way through to seal the victory.

Competition continues into the double elimination tomorrow with another perfect forecast promised. Be sure to tune back in tomorrow for more radical freestyle action from 9:00am onwards (skippers meeting / first live ticker update @ 8:30am).

The PWA is proud to announce that the entire 2011 PWA Bonaire World Cup will be streamed live via PWA TV on www.pwaworldtour.com. Weather depending, coverage of day one of competition is scheduled to begin at 12:30pm Sunday 12th June (UTC -4), when the freestylers will take to the water. 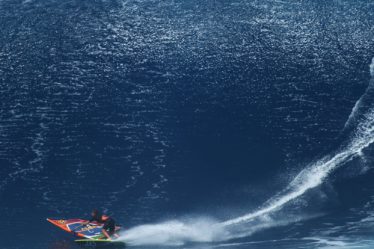